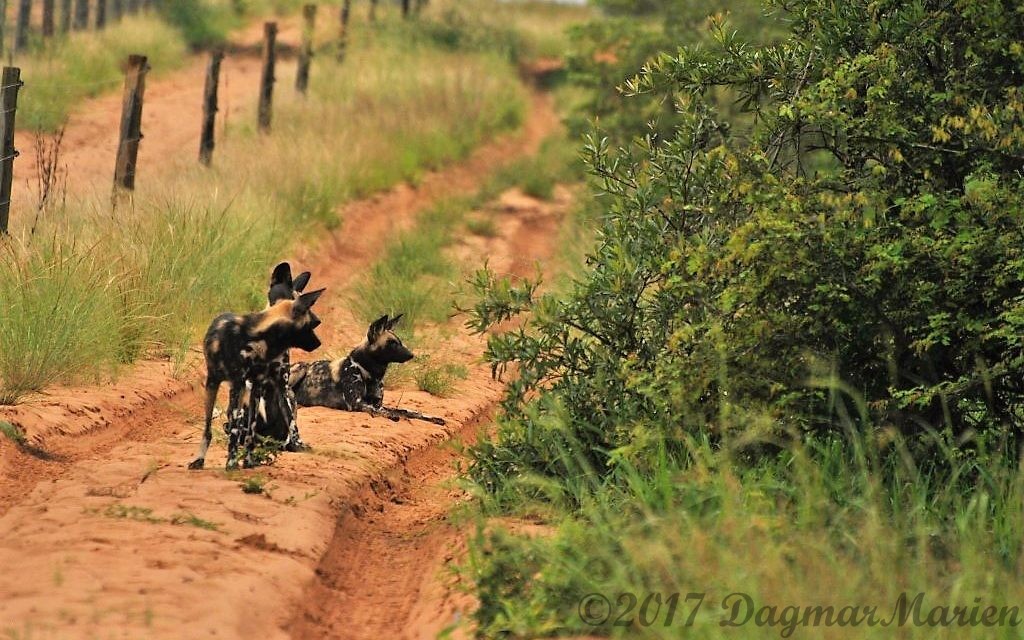 It was peaceful at camp, just me, the squirrels, snakes and the bugs. I used this time to have a decent shower and wash my hair. Dry shampoo is good, but doesn’t really do it for me.

After I did all the data inputting, which was the tracking with the GPS coordinates of all the animals since the beginning of the week, I did some catching up on my blog. Unfortunately my 5 GB internet ran out and I got stuck. Internet is very expensive here. I paid 399 ZAR for 5 GB, which is about 27 €. Vodacom is the only provider that has signal in Tembe.

The guys had a sighting of the African Wild Dogs, just my luck.. I’m using Hayden’s photo of the morning. Let’s hope I’ll get to see them as well soon.

So in the afternoon, Hayden drove us to the little shop near the reserve and I got 2 GB more for 239 ZAR (16 €), which is going to run out in another few days.

Whilst driving to the shop, we ran a flat tyre, after calling different people to find out what happened to the jack in the car and people coming to the rescue, the car was back on track.

At the same location, Hayden told us, that our nyala had arrived. He ordered bait so the dogs would come out of the forest. I put my brave face on and went with the rest to look at the poor creature laying on the floor, with his eyes open. It got shot specifically for bait. I know there are approximately 2000 too many of them roaming the reserve, but it’s hard to look at it. Next thing I know, Hayden gets a knife and starts cutting, he said I need to cut it up to take with us, that’s when I took my leave and waited in the truck at a safe distance. I like it they put Mortuary on their door instead of abattoir 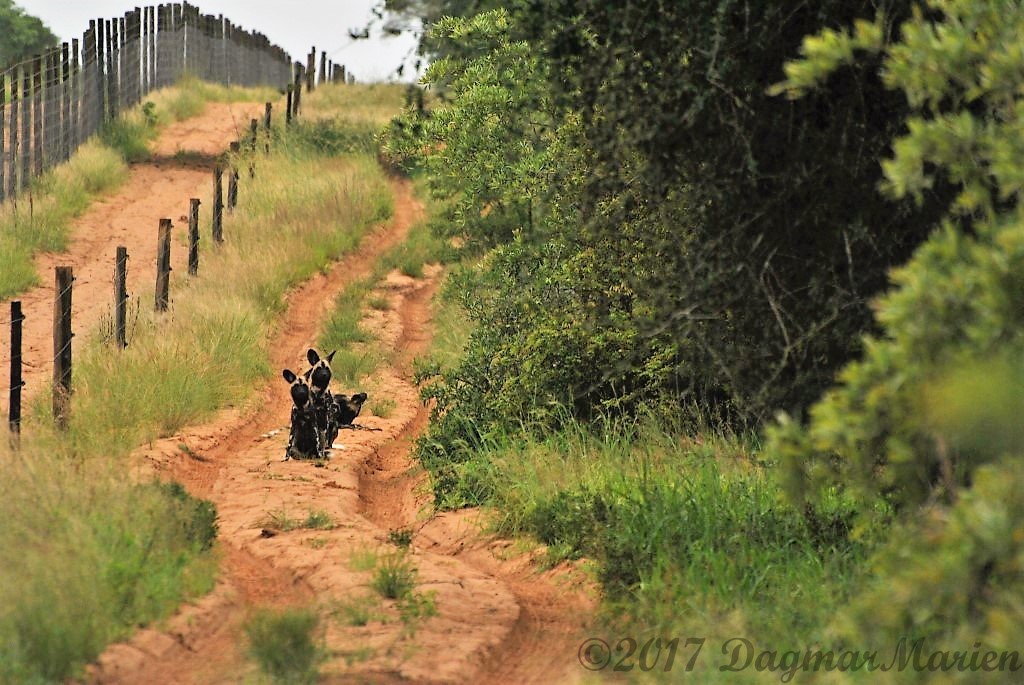 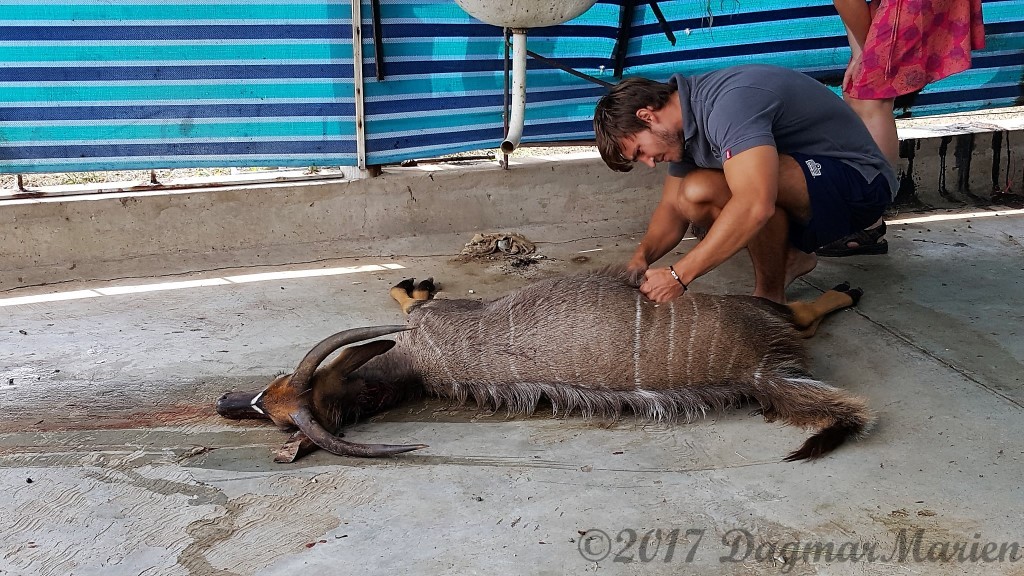 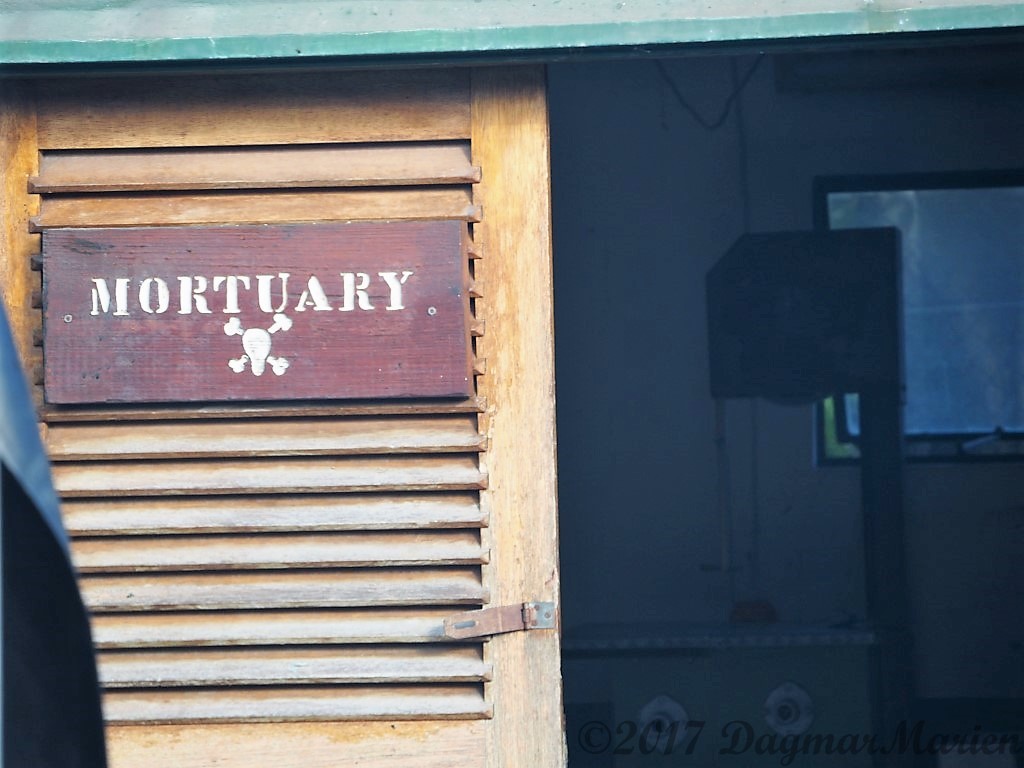 With the delay of tyre problems, nyala carving, we ended up 1,5 hours later on the road than planned. We went to pick up the leg, which was put in the back of the truck where we are sitting, so I went and sat in the cabin. We needed to get petrol as well, but the key was missing, so after 5 minutes, a phone call was made and the key was found. We made it back to the petrol barrels as we would’ve been stuck in the middle of the reserve.

This meant not enough time to get up at the northern fence, which is approx. an hour drive and it would’ve been dark by then. So we decided to track some of the lions, as they were on the move.

We were tracking TEPF70 with her 2 cubs, on our way following the signal, we found a black cobra on the track, these are quite dangerous, poisonous snakes. He moved away swiftly in the greenery. We continued our journey and found the location of the lioness, after waiting for 30 minutes, she moved further in the forest, so we made our way back.

On our way back, we suddenly hit a conglomerate of elephants, there must’ve been 30 of them, just beside the road and a big male coming straight towards us on the track. When I say close, I mean 2-3 meters from the car. We moved slightly forward and this huge male, at least 4 meters to the shoulders, came towards us. It was quite hostile. We switched off the engine and more and more elephants came out of the forest and walked towards us , to veer just in front of us to the right. Then this big elephant decided to go and check things out and walked back towards us, looked at us, we just didn’t even breath to prevent making a sound, walked just in front of the car, on the track to probably check up if everyone was still there. He came then back to us, lingered, looked, and thankfully moved on. But more elephants were coming out of the forest, by then it was dark and you could only see them when they were already right in front of you. After what seemed hours, but it must’ve been 20-30 minutes we decided it was safe enough to try to move forward. It was a heart-raising experience, quite unique to see at least 50 elephants together. It could’ve gone all horrible wrong if Hayden had made one wrong move, he said so himself. I wonder what the family reunion was about. 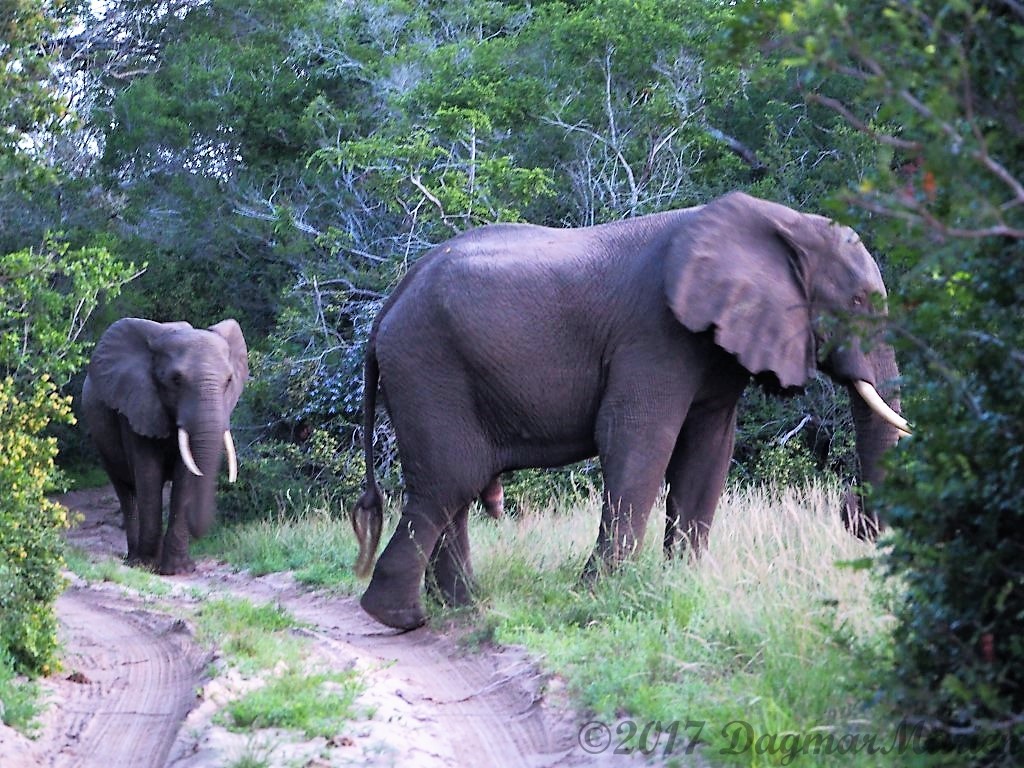 Tomorrow we’ll see if the dogs will come out with the nyala leg dragged behind the truck. 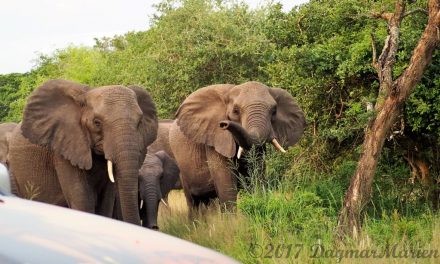 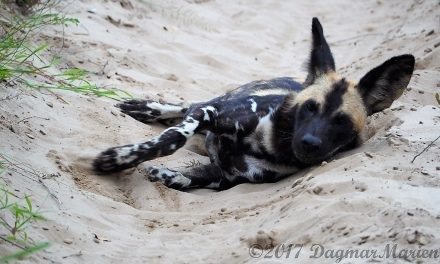 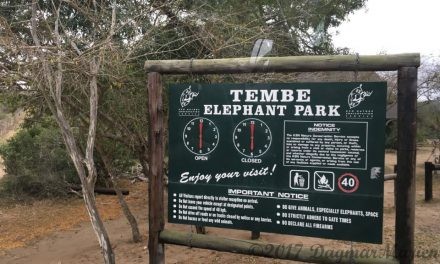 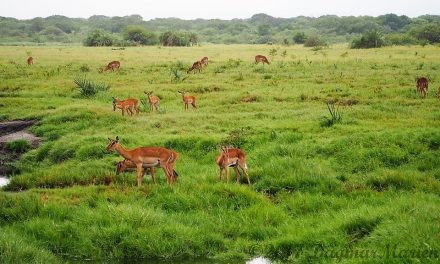 This is Zululand, not Disneyland